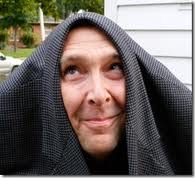 Of the assassins Shakespeare had little use except to push them around on the stage. It’s a smooth irony that a Shakespearean actor killed Abraham Lincoln. Beauty killed the beast; the printing press killed the president. Poor Lincoln died while watching a farce. This is how I’ve awakened today—lugubrious and itchy. So what?

Why write a blog and share morsel thoughts with abandon? I was a very lonely child. I couldn’t see and I used to go outside and shout “Is anybody out here?” Sometimes other kids wouldn’t answer. Why play with the blind kid—he just ruins the baseball game?

Is anybody out here?

Once when I was in graduate school in Iowa City I was so lonesome I turned the lights on and off repeatedly in my apartment. Maybe space aliens would come?

I love this hour before dawn. Winter. Just now I hear the furnace kick on with a hum. A loyal machine. Earnest. The furnace is like a good dog.

On the campus of Syracuse University there’s a wonderful statue of Abraham Lincoln riding a horse and reading a book at the same time. His horse knows where they have to go. I love that statue more than I can say.

Ben Okri’s “The Famished Road” is the greatest novel of the 20th century. Why hasn’t Mr. Okri been given the Nobel Prize?

Shakespeare pushed assassins around the stage. There were lots of assassins in his London. Catholic assassins; Protestant assassins; the regicide types; actors killing actors; even children had swords and talk about turf fight—beside every theater, a brothel and a pub.

Religious intolerance; theater; artistic vanity; sexual exploitation; alcohol—plenty of material for plays. All Shakespeare had to do was hang out.

Now the first hint of daylight…