My new memoir Have Dog, Will Travel explores how being paired with an exceptional guide dog changed me into a more curious, adventurous, and trusting person. Corky, for that was her name, helped me become better, especially on the inside. I think it’s safe to say this is the most  interior book I’ve yet written. And while no one can really do such a thing, I try to get inside Corky’s head as well. 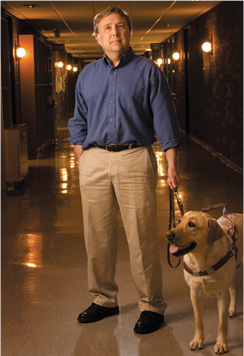 (Photo of Stephen Kuusisto with his third guide dog Nira, a yellow Labrador, in the English-Philosophy Building at the University of Iowa.)

I started my writing life as a poet. I remember the afternoon I told my father I wasn’t going to law school but instead had chosen to attend the Iowa Writer’s Workshop. As Franklin W. Dixon used to write in the Hardy Boys books, my dad was crestfallen. After a day or so he roused himself and said: “well we probably need more poets and no one in his right mind believes we need more lawyers.”

At Iowa I studied poetry with several well known poets including Marvin Bell, Donald Justice, and Sandra McPherson. Studying poetry meant both writing it and revising it–living and breathing extraordinary words by others and trying, often inexpertly, to write some lasting words of one’s own. That’s the thing about poems: in order for them to be considered any good they should be original and if you’re lucky your poem says something no one else ever has or at least not precisely. Ezra Pound said famously “poetry is news that stays new.” We should be surprised by poems, both as readers and writers.

Here’s the thing: when I was writing poetry in Iowa City I had no idea how to travel safely and independently–surely a primary need for any blind person. In my new book I describe how I went to Iowa two months before graduate school just so I could walk the town like a crime scene investigator–I walked a grid, up and down the charming brick streets and memorized the steps I’d have to take to arrive wherever I needed to be. In those days I was play acting at being a sighted person. This is not an unusual story among the blind and I claim no special distinction. But its safe to say I was closed in, anxious, quietly desperate, and yes, inwardly guilty–for wasn’t I a sham? And of course, as the depressed imagination goes–wasn’t I a sham in all things?

In Have Dog, Will Travel (which is subtitled, “a poet’s journey”) I narrate how I grew tired of not knowing how to strike out on my own and go anywhere I wished, any time, yes, on a whim. Freedom is about many things but “whim” is surely central to it. In the book I describe how, as a college student living in western New York I wanted desperately to go to New York City and hear the poet James Wright read at the 92nd Sweet YMCA.  In those days I needed sighted friends to accompany me places or I couldn’t go. I found no willing co-conspirators in my quest to hear one of my favorite poets and I stayed home. I felt the disappointment bitterly.

Climbing out of that place, that self-imposed covert, took several years for me. My book about a yellow Labrador is a poet’s journey because with Corky by my side I was able to do what others freely do all the time–I could wander without goals in New York City; walk loose jointed and open; push my curiosity the way a child floats a toy sailboat in Central Park. The book’s most joyous passages have to do with trusting my canine pal, plunging into traffic, and pressing forward because I just wanted to go to a baseball game (I’m a Mets fan) on my own.

Except I wasn’t on my own. I had a poised, confident, upright, vigorous, and soulful sidekick, who happened to be one hell of an exceptional dog.

ABOUT: Stephen Kuusisto is the author of the memoirs Have Dog, Will Travel; Planet of the Blind (a New York Times “Notable Book of the Year”); and Eavesdropping: A Memoir of Blindness and Listening and of the poetry collections Only Bread, Only Light and Letters to Borges. A graduate of the Iowa Writer’s Workshop and a Fulbright Scholar, he has taught at the University of Iowa, Hobart and William Smith Colleges, and Ohio State University. He currently teaches at Syracuse University where he holds a professorship in the Center on Human Policy, Law, and Disability Studies. He is a frequent speaker in the US and abroad. His website is StephenKuusisto.com.

4 thoughts on “Dog of My Travels”