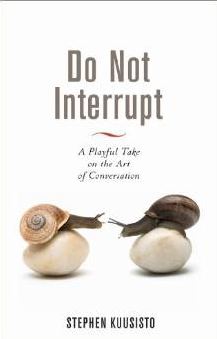 I remember reading an essay by Christopher Hitchens where he mentioned that Edmund Wilson understood why Alexander Woollcott’s personality didn’t appeal to everyone. It’s a British observation, one few Americans recognize, at least not immediately. Americans say: “Like me, like my dog.” The English are less encumbered.

As a blind man I want to be liked. I had a rough go as a boy. That this desire is wholly unreasonable is often difficult for me to grasp. If I say I’m appealing then this must be so.

But of course it isn’t so. My disability is pre-defined by ableist metaphors and practices. I arrive, as it were, pre-disliked, like pre-stressed furniture. Accordingly I’m refreshed by the toughness and determinacy of others. I’ve always loved this quote from William S. Burroughs:

“I am not one of those weak-spirited, sappy Americans who want to be liked by all the people around them. I don’t care if people hate my guts; I assume most of them do. The important question is whether they are in a position to do anything about it. My affections, being concentrated over a few people, are not spread all over Hell in a vile attempt to placate sulky, worthless shits.”

I am not entirely American.

It intrigues me of course just how many people in the United States will cheer for a man who is a worthless shit. And this is not a British “thing” but rather something Kurt Vonnegut Jr. put his finger on some forty years ago. I’ll have to paraphrase him, but the gist of his observation is that Americans are fond of saying: “If you’re so smart why ain’t you rich.” A vile man with deep pockets is invariably held as a wise fellow by your average downtrodden American prole.

It’s possible in the US to be a toxic toad and still be widely admired. We’re not the only nation where this is the case, but as far as I know we’re the only country where people will say, “Have a nice day,” while burying their despair, holding their noses, and voting for a mobile bag of vomit.

What do we think of ourselves? Not much apparently. Thoreau put it this way:

“See how he cowers and sneaks, how vaguely all the day he fears, not being immortal nor divine, but the slave and prisoner of his own opinion of himself, a fame won by his own deeds. Public opinion is a weak tyrant compared with our own private opinion. What a man thinks of himself, that it is which determines, or rather indicates, his fate.”

One thought on “From the Toxic Toad Department”