I was fifteen when the Kent State shootings happened. My father was a college president so I was fully aware of what was going down. My dad said the governor of Ohio had blood on his hands, that he’d pitted kids against kids—national guard vs. college students. My father said James Rhodes should have known better. “But didn’t students burn down the ROTC building?” I asked. “Not the ones they shot today,” he said. That was one of my earliest lessons on not making groups of people into villains or victims without sufficient evidence. Here’s a photo of my dad talking with student protestors in 1969. Rather than call the police he turned their occupation of his office into a seminar on nation states, warfare, and the international economy. 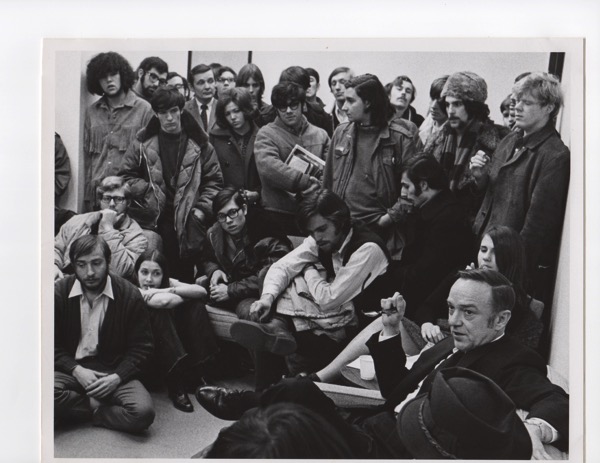 One thought on “Kent State”

"Disability" News About Stephen Kuusisto Books BOOSTED! Connie's Corner Current Affairs Disability Blog Carnivals Disability News and Views Disability Perspectives Events Freakin' Blind Guiding Eyes for the Blind Have Dog, Will Travel Music No Name for It Planet of the Blind poet Poetry Random Thoughts Religion Say It Ain't So Spread the News! Spread the Word Television The ADA The Sublime and Ridiculous Travel Uncategorized What a Dog Can Do