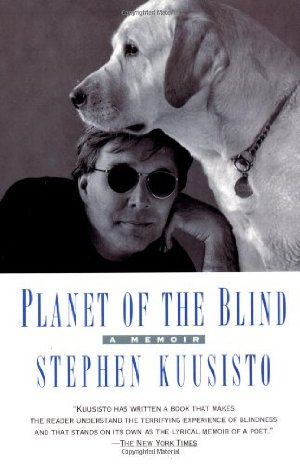 I’ve met hundreds upon hundreds of college faculty throughout my life. I grew up on campuses. My father was a professor, then a Dean, and eventually a college president. My childhood was filled with cocktail parties and chatter. Over the course of my own career I’ve taught at four well known academic institutions and have served in various administrative roles. What I’ve come to understand is that higher education still functions like those cocktail parties of yore and I can attest as a blind man that it’s a party that doesn’t love the disabled.

My wife worries when I write so candidly about academic ableism. She fears it will brand me, that a prospective future employer will be troubled by my candor. I worry about this also. Yet I can’t shake off what I know. The party is chummy and its held in houses without ramps, where the host doesn’t want your guide dog, where you’ll not be able to use the rest room. And when the clubby faculty actually see you they’ll quickly look past you to see if there’s someone better to talk with.

Cocktail parties are engines. Their fuel isn’t the vodka, it’s self-contempt disguised as jocularity. As a boy I heard the terrible laughter of the professors—a horse laugh; the basso profundo guffaw; various squeals. They were “me me me” chortles. They scared me. Hawks, wolves, rapacious fish.

The contempt of faculty for other faculty is an old story. I’ve seen feminist scholars who don’t like other women and who’d do anything to undermine their women colleagues. I’ve seen faculty hiring committees sneer at a job candidate who hailed from a working class background; seen faculty of color dismissed in coded lingo only the chummy would use—his work needs more grounding; further evidence from the published record, etc.

Ableism in the academy is rampant and college faculty pass it around without scrutiny because it’s the last easy bastion of smug satire—contempt disguised as jocularity—chuckle, if you need an accommodation sonny you’re not a real student. You certainly shouldn’t be on the faculty.

The professor who advertises that he studies “micro-aggressions” is an ableist. He’ll be the first to tell you if you were a nicer person you’d get the accommodations you need and really it isn’t structural ableism that prevents you from having what you require to work in dignity, it’s your pesky attitude.  Be nicer little fella. By the way while you’re up, can you get me another drink?

The controlling metaphor of higher ed is the boozy get together. Once you’re in, even if you hail from a historically marginalized background yourself, you’ll want to do some sneering about the aspirants who want educations in the land of exceptionalism. The super ego of the academy reflects the ethos of the private club.

If the boy I was, the one in the attic, who feared the monstrous laughter of the professors had chosen the career outlined for a blind citizen of that era I’d have learned how to cane chairs or sell magazines. Higher ed was my route and yet the road was and is unfriendly just as it is for Black students and all others who are claiming their citizenship and rights from outlier positions.

But still I expected more from the professors. I expected that by this time in our nation’s history they’d have put down their drinks.

Some years ago I wrote a little send up “poem” for the professoriate:

Triflers beware! The professors are here:

Punctilious, mindful, on the move,

They’ll flush you out, invest your reveries,

Or close your brown studies. It’s you they’ve watched

The professors have arrived: the robed Savonarolas!

Leap in the dark, grope or guess, send up a trial balloon,

They swoop through the long schoolroom,

Yes you can argue the professors don’t like anybody. But notice the poem reveals how the uneducated serve as metaphors for dumpling students or colleagues they so ardently despise.

Am I being unfair? The question is absurd. American higher education is the last bastion of nearly undivided disability discrimination. Just visit this website:

One thought on “The ADA@30 “Campus Cocktails””