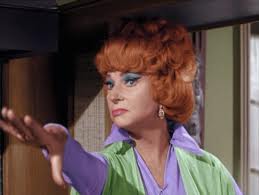 Photo of Agnes Moorehead from “Bewitched”

When my friend Bill Peace wrote yesterday about meeting a gas station attendant who was clearly addicted to meth amphetamine, and the intersection of that encounter with his own disability, I was reminded of the dozens of times I’ve been in the company of drunks, addicts, and broken wanderers. Traveling blind differs from sighted travel in only one respect: strangers are more likely to approach when you can’t see. They’re generally not malevolent, though I can’t prove it—my impression is they’re lost. Its ironic they should gravitate to a blind person. Over the years I’ve come to see this gravitation as something spiritual. I don’t mean this in a churchly sense, but more like Carl Jung’s analysis of UFOs. A blind person going confidently about his or her business means something to hapless wanderers. Once in New York City I was grabbed by an Asian man who dragged me across the street. On the far side he actually bowed and then ran away. He never said a thing. My guide dog was as stumped as I was. They didn’t teach us about this at guide dog school. The man was working something out. Doing some penance.

What’s clear is that disability always represents something—its like the mirrored ball in a disco. You may be—no, likely are—minding your own business. You’re pumping gas like Bill Peace was doing, or you’re standing on a corner thinking about tartar sauce, why do they call it “tartar sauce”—did the Tartars actually make sauce—when a man disguised as a man appears. He says he has headaches. He says he lost his job. Says inside his clenched fist he has a ruby that once belonged to Agnes Moorehead. These things happen all the time when you have a visible disability. There is no such thing as shining, neutral weather. Not if you are a cripple abroad in America.