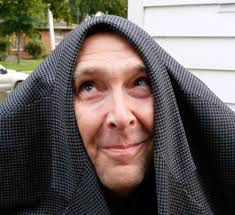 One has questions of course. It starts when you’re just old enough to despise Jacques Lacan. Blind kid, I was—“we don’t need no stinking mirrors…” And forget audio identification, no one born human in the last 30,000 years has imagined s(h)e’s a bird, even in infancy, for even a babe knows they’re too beautiful to be emulated though we try, lord knows, and there’s plenty of evidence to suggest our very language comes from our attempts to mimic birdsong and I’ve no problem with this, in fact I like the idea and favor it. But I was never nor have I ever been disposed to the Lacanian fix of proto-ego formation wherein one’s troubled by all that is and isn’t me. How do I know this? Because I didn’t look in a mirror in gloomy or ecstatic revery as a child. I had a toy monkey instead. And I talked to that monkey. And I said things like:

You see? I was already beyond the mirror period. And Lacan goes on and on as if he’s speaking for all children in all eras, the mistake of Freud and his followers. Some of us are just wilderness children. It helps to have been impaired where the eyes were concerned, but you don’t have to be a blind child to abjure or skip or kick the can of the “mirror stage” and I’ve been thinking about this rather much for I have a rag bag piñata kind of sensibility—there’s all kinds of starstuff and goo gaws and goo gabs inside me (yes, Whitman, as well as you too…) and even as a wee bairn I never met a looking glass I gave a diddly damn about. I didn’t think I was the monkey. Didn’t think he felt the way I did. How old was I you ask? Three. I was three. We lived near the harbor in Helsinki. I wasn’t overly concerned about the self.

Lacan would say I just don’t remember. He would have to say that for his idea about human development and the elaboration of psychological determination rests on the infantile mirror. I see myself. I see that which is not me. I will be clobbered into language.

Silly. Last gasp of enlightenment. If there’s anything about trans humanism I like it’s this: your head is connected below the cellular level to the pine tree. And as Basho said: “The pine tree! Another thing that will never be my friend!”

One has questions of course. Why should I be friends with Lacan?